5 main mistakes that people do when buying a bird deterrent

The first major mistake that is usually made is that people don’t know which birds they specifically want to deter. Except for the propane cannon, most bird deterrents are meant for special birds or bird GROUPS. For example, if you want to get rid of crows, scare owl are unlikely going to be effective, as the owl is not the crow’s enemy in the wild. For crows, either a special bird guard producing sounds or a scarer in shape of a dead crow, will be more effective. And the laser bird scarer, for example, works mostly for migratory birds, pigeons and swallows.

Secondly, deterrents are useless when birds are already used to visiting some spots in the garden. Perhaps they have already tried your strawberries or cherries and know that there’s enough food for them. In order to prevent this, deterrents should be set up earlier, so that birds don’t even dare to come close.

One of the biggest mistakes that people make on a daily basis after purchasing a bird control device (a bird scare ball, an artificial owl or animal) is that they leave it in one place for several weeks. However, birds are very smart and when they see that the fake wolf is not coming closer, they know there’s no danger for them. It’s more effective when you change the location of these fake animals and birds every day. The bird scarer kite that has recently become one of the most effective and simplest bird scarers, shouldn’t be forgotten for weeks after you have set it up. In a stronger wind, the cord holding the kite may break and the kite might fly away. It may also happen that the cord wraps around the rod. So, after a few days, it’s important to check the kite. Even though there’re two kites in a packet, they may break over time. That’s why you should have a spare kite.

As regards bird scarers, the higher and more visible they show, the more efficient they are. If you leave a balloon or kite very low, birds don’t notice it from a distance. Birds should first notice the deterrent, not a red strawberry. Deterrents should firmly stand in the ground, so they will not fall over.

One is not enough

A single bird deterrent is not usually enough. For example, it’s not a good idea to buy only bird balloons or only tapes for efficient bird control. They work but they might be ineffective on their own. So, it would be wise to add something else, use them in combination with other bird scaring techniques. Maybe it’s a good idea to make a traditional scarecrow or buy some artificial animals or a sprinkler-deterrent. 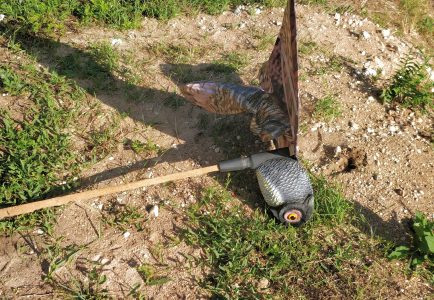