9 Ways of Getting Rid of Seagulls

Gulls can spread diseases and put our security at risk. Here you will find some ways of keeping these birds away.

Gulls are frequent guests at rubbish dumps, on beaches, in parks, and on sidewalks, where they can truly become a nuisance.

Their cries may bring back memories of those long summer days at the beach, but seagulls that flock together can be pretty pesky, even bad for our health.

To keep them at bay, people have come up with deterrents ranging from superpowered squirt guns to sheepdogs, with varying levels of success.

The birds aren’t just annoying beachgoers by dive-bombing boardwalks to snag French fries. They can be a real safety threat when they nest and fly around airports. Plus, wherever they go, they poop. And they can spread disease.

But we aren’t likely to alter our behaviour enough to send gulls packing. Perhaps we could minimize overflowing boardwalk bins and the number of people who feed wildlife, but gulls also loiter around such vital areas as farms, vineyards, and orchards.

Here are ten alternative methods—costing anywhere from a few bucks for shiny tape to thousands for heavy electronics—that promise to keep the gulls away. A combination of tools often works best. The trouble with most techniques is that gulls become acclimated to things that don’t have real consequences, which means they’ll be back. 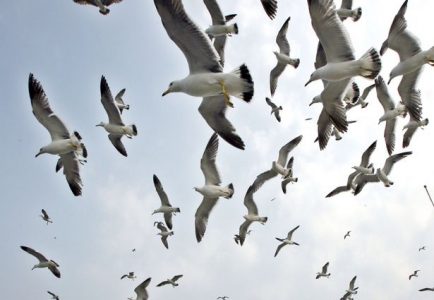 Sheepdogs are the newest tool in the anti-gull lineup. Recent research has shown that a sheepdog with a handler walking a 200-meter stretch of beach can, by continually chasing the birds off, reduce gull numbers by up to 99 percent. Patrolling with a dog at peak gull hours—early morning and early evening—made the effort more efficient.

A falconer charges about 5o euros per hour to deploy a hawk or peregrine falcon at a landfill or agricultural site that’s overrun with gulls. For the most part the raptors just scare off the birds, but they do target with the intent to kill—and gulls know a predator when they see one (that is the “real” consequence which is missing from other methods). It is claimed that scaring with predatory birds has turned a landfill with about 5000 seagulls into a place, where now only a handful of seagulls land per hour. Abatement with raptors requires daily attention, of course. It’s a bit like needing a gardener to come in and maintain the plants, otherwise, the weeds keep coming back.

Gulls don’t like bright, scary owl faces on masks or balloons (often called “terror or scare-eye balloons”), and some will also avoid wooden owls, kites shaped like hawks, and decoy cats. So if you don’t mind a few lawn ornaments, you can at least keep the annoying birds guessing.

Seagulls seek out high points on roofs and chimneys, so installing parallel wires, plastic or steel spikes, or polyurethane netting to these areas can help prevent birds from perching.

Today’s technology has led to the development of a series of bird scaring lasers.
Cheaper ones are the size of a flashlight, and by pointing them at birds, it is possible to scare them away from kilometers away. More expensive stationary lasers keep a bird-free zone around where they are placed.

Nowadays, there are a lot of gull-repelling electronic gadgets, including cannons and amplifiers that scare birds using different sounds. Using gulls’ own distress calls, calls of predatory birds, or strobe lights can be effective as well.

Reflective material can baffle birds, so mirrored or shiny tape and streamers are an inexpensive, if short-term, solution.

This is one of the most effective methods for effectively deterring birds off a large area.

Without doing real harm, these flat strips carrying electrostatic pulses give birds a shocking incentive to find somewhere else to land.